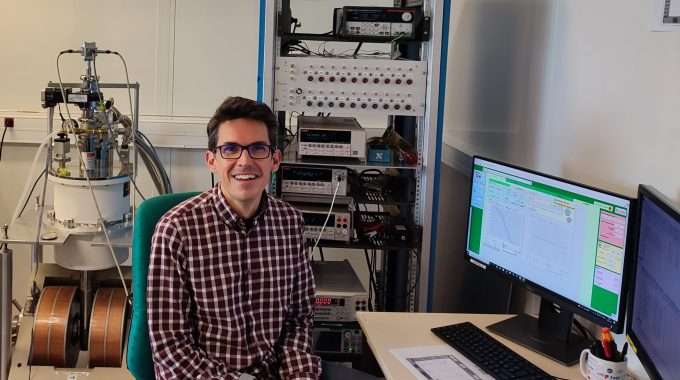 Javier Villegas (Spain, 1976) has always sought to understand how the universe started. That’s why, from an early age, he was interested in condensed matter physics. After a career as a researcher in academia, he now works as research director at the CNRS/Thales Joint Physics Unit. This is a joint laboratory between the National French Centre for Scientific Research (CNRS) and the electronics company Thales dedicated to the development of information systems and services for the communications, aerospace, defense, and security markets.

What is it like to go from researching for academia to collaborating with a company?

But now, in addition to doing this research and publishing papers for academia, we also prepare quite a lot of invention patents. The fundamental research we develop can be applied for devices that go from filters for telecommunication signals to new kinds of memories. This valorization scheme is possible mainly because we work closely with engineers and industrial researchers who bring new insight into the fundamental research we do. So I feel very lucky to work in this environment, in which ideas can flow very easily from fundamental studies, which is what I actually still do, into applications.

Could you give more details on how your research can be applied?

We tried this experiment with a structure in which a ferroelectric material is sandwiched by two superconductors. When an electric flow across this junction, we found dramatic changes of the electrical resistance depending on the “history” of voltages applied to the junction. Such memory effects are very interesting. Unexpectedly, when we removed the ferroelectric and put a material that was not ferroelectric in between, we found similar effects that the ones expected with the ferroelectric. So, the microscopic origin of those interesting effects was different from the one we had foreseen. This type of surprise happens often in research, that’s what makes it exciting! We actually discovered that there was another mechanism in this story, something which is called oxygen vacancies: oxygen is removed from the structure due to the applied voltages. These oxygen vacancies are also accumulated in the interface, kind of mimicking the effects we expected from the ferroelectric, and reproducing them when the ferroelectric was no longer there. This was a surprise and it turned out that we now have a lot of ideas on how to create very simple devices that exploit this memory effect. We have a patent on this and an ongoing European Research Council (ERC) project financed by the European Union.

Is this memory similar to the ones in our daily electronic devices?

Overall their main function is the same, to store information, but its operation and possibilities are different. In our superconducting device, the two non-volatile states depend on oxygen being “in” or “out” of the superconducting oxide. You have the two classical levels of memory: zero and one, which is when the oxygen is in or out. The electrical resistance is very different if the oxygen is “in” or “out”. Thus, just by measuring the electrical resistance, you can realize if the oxygen has moved. But also, and crucially, there are nonvolatile intermediate states between 0 and 1, actually a continuum of states. This is called “memristive” behavior. With this, you can go beyond the only two options 0 and 1 that give you the current computing architectures and do something new which is called “neuromorphic” computing.

The other significant difference is that superconductivity eases miniaturization and connectivity so that storing information can be done at the nanoscale. The smaller the scale, the more of these bits you can put on the surface and the higher data information you can store. So superconductivity opens a way into broader opportunities for applications.

Are there other interesting studies that you have been working on lately?

My team and I recently succeeded in achieving a proximity effect from a d-wave superconductor to graphene. We were able to demonstrate that superconducting particles propagate in graphene over a reasonable long distance, like hundreds of nanometers. This finding opened the door to creating a high-temperature Josephson junction with graphene, which is a project one of my students is working on right now.

How does the Nanocohybri action help you in your research?

The most important thing is the possibility to meet and share information about my research with my colleagues. It’s essential because we don’t have all the same abilities, the same experimental equipment, or the same background. For example, thanks to a Nanocohybri conference that took place in Belgium in 2019, I had the chance to meet a group of theorists interested in my work. We shared our research and, not only did I come home with a lot of new ideas, but also now our lab has an ongoing collaboration with them.

In addition to bringing collaborations, it is clear that these COST actions are very efficient in communicating science. This lets your pairs know what you are doing and helps your work be noticed. Sometimes nowadays we have so many journals, so many publications, so many papers coming out that it is very difficult to follow and a lot of work goes unnoticed. Beyond the conferences and meetings, there is also the possibility for students or confirmed researchers to move around from one lab to another, either to work on a particular project or to do experiments. It’s also possible to share equipment. I think the benefits of this COST action are countless. So, I would really like these initiatives to continue and to be renewed forever if possible.