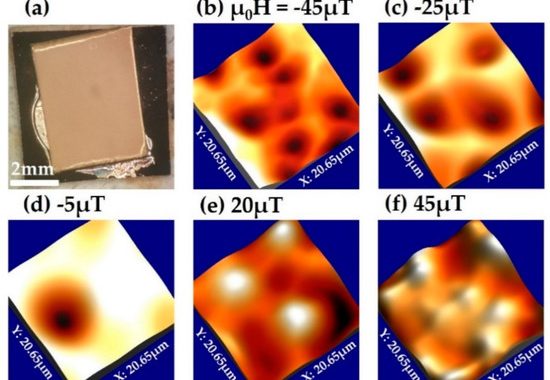 Abstract: The high critical current density of second-generation high-temperature superconducting (2G-HTS) tapes is the result of the systematic optimisation of the pinning landscape for superconducting vortices through careful engineering of the size and density of defects and non-superconducting second phases. Here, we use scanning Hall probe microscopy to conduct a vortex-resolved study of commercial GdBaCuO tapes in low fields for the first time and complement this work with “local” magnetisation and transport measurements. Magnetic imaging reveals highly disordered vortex patterns reflecting the presence of strong pinning from a dense distribution of nanoscale Gd2O3 second–phase inclusions in the superconducting film. However, we find that the measured vortex profiles are unexpectedly broad, with full-width-half-maxima typically of 6 μm, and exhibit almost no temperature dependence in the range 10–85 K. Since the lateral displacements of pinned vortex cores are not expected to exceed the superconducting layer thickness, this suggests that the observed broadening is caused by the disruption of the circulating supercurrents due to the high density of nanoscale pinning sites. Deviations of our local magnetisation data from an accepted 2D Bean critical state model also indicate that critical state profiles relax quite rapidly by flux creep. Our measurements provide important information about the role second-phase defects play in enhancing the critical current in these tapes and demonstrate the power of magnetic imaging as a complementary tool in the optimisation of vortex pinning phenomena in 2G-HTS tapes.