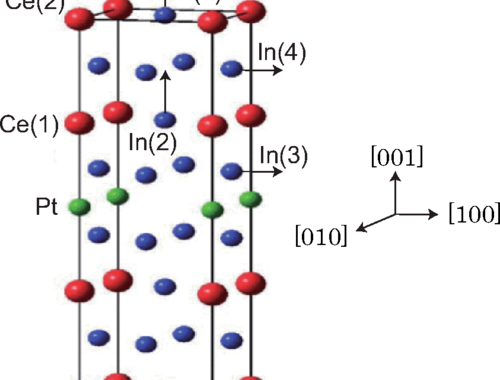 Abstract:  115In nuclear quadrupole resonance (NQR) measurements have been carried out on Ce3PtIn11, a heavy fermion compound harboring two inequivalent Ce sites. This system exhibits magnetic transitions at T1n=2.2 K and TN=2 K, prior to entering a superconducting state below Tc=0.32 K. Previous measurements imply that magnetism and superconductivity are spatially separated and only the Ce(2) sublattice orders magnetically, with a quantum critical point at pressure pc=1.3 GPa, while the Ce(1) sublattice is paramagnetic. However, the present nuclear relaxation rate behavior of 1/T1∝√T reveals the presence of critical spin fluctuations indicative of close proximity to another quantum critical point, presumably at a small negative pressure, which is associated solely with the Ce(1) sublattice. The ordered wave vector is found to be most likely (1/2,1/2,h).