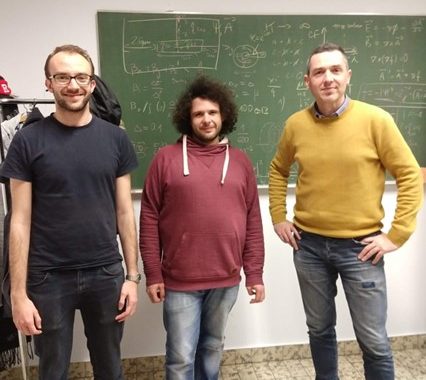 Miniaturizing SQUIDs down to the nanoscale makes them suited for the investigation of magnetic properties of nano-sized magnetic particles (MNPs). Using SQUIDs as magnetic flux to voltage converters, one can use them to measure the magnetization of a MNP. In this configuration the figure of merit is the spin sensitivity  given by the ratio of rms flux noise and the coupling factor . The coupling factor gives the flux coupled to the SQUID per magnetic moment of a MNP. In the group in Tübingen, the standard approach to determine the coupling factor is based on simulations with the simulation tool 3D-MLSI, which solves London equations on 2D current sheets. The group in Antwerp is able to simulate 3D structures using the Ginzburg-Landau (GL) theory, which allows a much more detailed description of more complex superconducting structures.

During the STSM, comparative simulations were carried out, followed by detailed discussions of the results, led to a good understanding of the capabilities and limitations of both simulation tools. On this basis simulations of coupling factors have been performed, which are intended to be published in a manuscript on the coupling of MNPs to SQUIDs in the far- and near field regime.