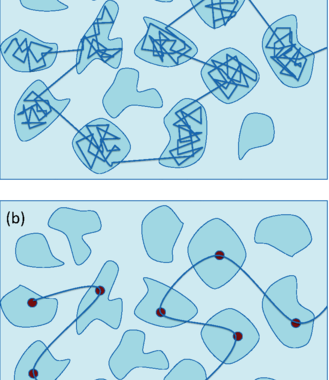 Abstract: Recent scanning tunneling microscopy experiments in NbN thin disordered superconducting films found an emergent inhomogeneity at the scale of tens of nanometers. This inhomogeneity is mirrored by an apparent dimensional crossover in the paraconductivity measured in transport above the superconducting critical temperature Tc. This behavior was interpreted in terms of an anomalous diffusion of fluctuating Cooper pairs that display a quasiconfinement (i.e., a slowing down of their diffusive dynamics) on length scales shorter than the inhomogeneity identified by tunneling experiments. Here, we assume this anomalous diffusive behavior of fluctuating Cooper pairs and calculate the effect of these fluctuations on the electron density of states above Tc. We find that the density of states is substantially suppressed up to temperatures well above Tc. This behavior, which is closely reminiscent of a pseudogap, only arises from the anomalous diffusion of fluctuating Cooper pairs in the absence of stable preformed pairs, setting the stage for an intermediate behavior between the two common paradigms in the superconducting-insulator transition, namely, the localization of Cooper pairs (the so-called bosonic scenario) and the breaking of Cooper pairs into unpaired electrons due to strong disorder (the so-called fermionic scenario).