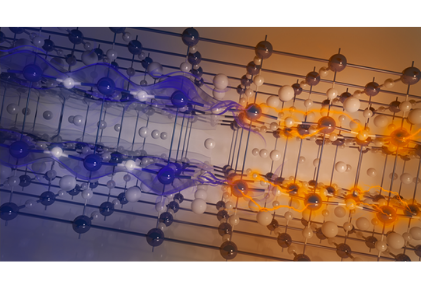 On the right  panel, the copper-oxide planes of the material YBCO are presented in the strange metal phase, where the strong interaction between electrons, the ‘quantum entanglement’, is illustrated as lightning. On the left panel, the same planes are presented when charge density waves appear. Here, the symmetry of the system is reduced by the appearance of these local modulations of the conducting electrons, which cause the suppression of the strange metal phase.​

The paper “Restored strange metal phase through suppression of charge density waves in underdoped YBa2Cu3O7–δ” from the Chalmers University of Technology group is now available in Science Magazine ( Science 373, 1506(2021)9. The research has been led by the Chalmers group, in collaboration with researchers from Politecnico di Milano, University La Sapienza, Brandenburg University of Technology and the European Synchrotron facility (ESRF). Congratulations to the Teams!

The paper focuses on understanding and controlling the enigmatic state called ‘strange metal’, appearing in high temperature superconductors at temperatures above the superconducting transition. The main result is  a new evidence of an intimate connection between the strange metal state and a “directional” local charge modulation in the conducting electrons called charge density waves (CDW). More specifically, the strange metal state is suppressed by the appearance of these charge modulations, providing valuable insights into the possible mechanism behind this enigmatic state. The experiment also shows that CDW can be controlled by applying strain to the material, leading to a novel technique of using strain to turn the strange metal phaseon or off. This is the first step towards a systematic experiment, where strain control can be used to manipulate new classes of quantum materials.