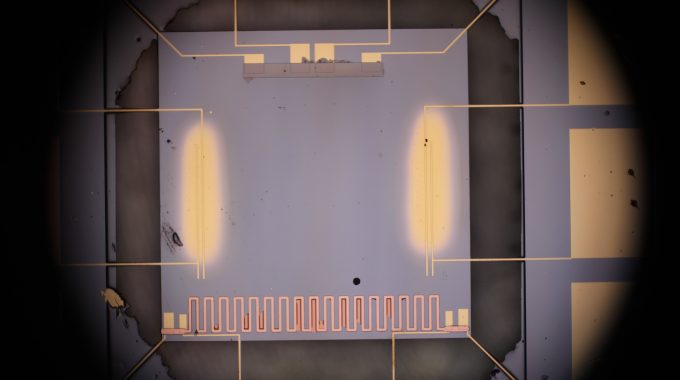 The aim of this short term scientific mission was to gain expertise on two major aspects of specific heat measurements on ultra-thin films:

During these two weeks I got familiar with both the measurements techniques- management of sensitive measurements and with the fabrication process and methods. Moreover, I was able to carry back to my home lab two nano calorimetric cells that I fabricated during this STSM, for a future use.

This STSM was part of an ongoing collaboration between the two groups, that of Aviad Frydman in Bar Ilan University, Israel and that of Olivier Bourgeois of the Neel institute, France. The collaboration is planned to be continued in the coming years. As part of this collaboration we plan to preform specific heat measurements on ordered arrays of Sn nano-dots proximity coupled by a thin metal layer. This system is expected to exhibit the SIT as a function of the coupling metal layer thickness. We plan to measure the Cp variation versus temperature while adding layers of metal between the Sn dots in-situ at low temperature, directly on the calorimeter. This will be done using the “quench condensation” technique by which we can deposit sequential ultrathin layers of metal at cryogenic temperatures and ultrahigh vacuum. The coupling between the nano-dots will be tuned by the number of the atomic metal layers deposited on the silicon membrane calorimetric sensor. For this purpose, an experimental system capable of quench condensation on a calorimeter system for measurements as a function of thickness or resistance was developed. The major advantage of this method is the ability to measure the Cp signature versus the thickness of the coupling thin metal layer, without the necessity to expose the system to ambient conditions.