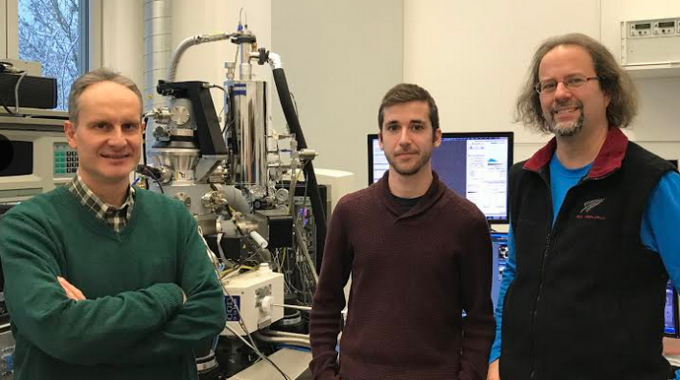 The object of this short-term scientific mission was to utilize the Helium Ion Microscopy technique available at the Ion Beam facility of the Helmholtz Center in Dresden (Germany) to perform focused ion beam-induced deposition of superconducting W-C nanostructures. The research stay of Pablo Orús, a PhD student in the Materials Science Institute of Aragón, in Zaragoza (Spain), was hosted by the team of Dr. Gregor Hlawacek.

The usage of a focused beam of helium ions permits high resolution in the patterning of the nanodeposits while maintaining their superconducting behavior. During the STSM a growth protocol was successfully developed and optimized for the patterning of superconducting nanowires of different geometries, reaching line widths as low as 10 nm (virtually unreachable using the more conventional gallium ion beams). Low-temperature electrical measurements were performed back in Zaragoza after the stay to characterize the superconducting properties of the nanowires.