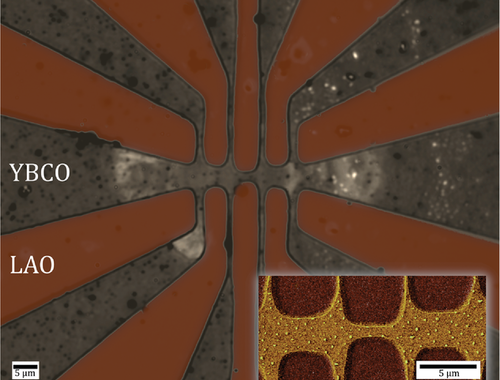 Abstract: Combining direct visualization of current-induced oxygen migration through optical microscopy and finite element modeling of driven oxygen diffusion, it is possible to estimate the average activation energy of oxygen motion in the crystallographic ab-plane of c-axis oriented polycrystalline YBa2Cu3O7−δ films. Experiments and modeling are compared side-by-side for the case of constant current electromigration as well as for a train of current pulses of varying amplitude. The simulations reproduce the induced resistance changes after electromigration and confirm a high degree of spatial inhomogeneity in the stoichiometry. Assuming a temperature and oxygen concentration dependent resistivity, the authors are able to capture the change of superconducting critical temperature, normal state resistance, and the development of multistep transitions as a function of the electromigration history. The simulations are further applied to scrutinize the influence of activation energy, disorder in oxygen content, and initial oxygen concentration on the electromigration process. These results shed new light on the non-local modifications produced by the electromigration process on oxide conductors.