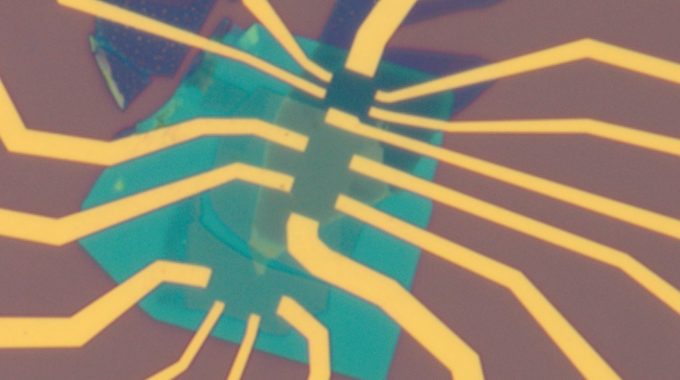 The aim of this short-term scientific mission was to utilize the glovebox available at the Zernike Institute for Advanced Materials in Groningen (Netherlands) to fabricate van der Waals heterostructures of 2D ferromagnets and thin layers of spin–orbit materials. I worked together with the research group of Marcos Guimarães and created samples consisting of Fe5GeTe2 and MoTe2 layers. On these samples we conducted spin–orbit torque (SOT) measurements later.

During this three-week STSM period I mastered the glovebox fabrication techniques: how to exfoliate crystals, which are prone to degradation in air, inside the glovebox, and how to find and stack them via a motorized remote controlled stacking station. Later this knowledge will be useful at my home university to handle a wider range of air-sensitive materials and create semiconducting-ferromagnetic (like above) or superconducting-ferromagnetic hybrid heterostructures which are promising for various fields from exotic topological superconductivity to spintronics. Moreover, during the measurements I was introduced how to characterize ferromagnetic layers via anomalous Hall effect measurements, and I have learned how to perform 2nd harmonic measurements to study spin–orbit torques. Fe5GeTe2/MoTe2 heterostructures have the potential to be used as magnetic memory bits with low power consumption due to magnetization switching with low current via the SOT effect. This short-term visit was the start of an ongoing collaboration between the home and host university on SOT devices.