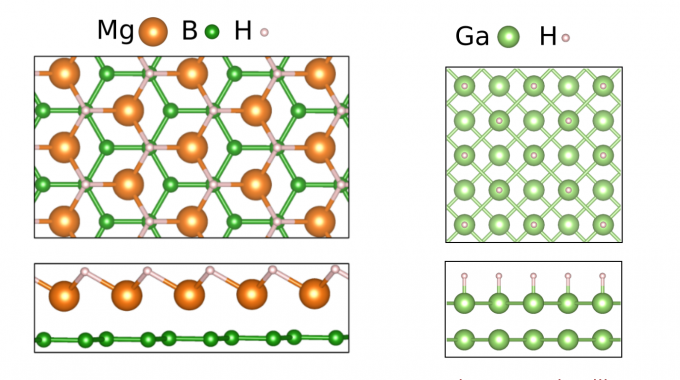 Superconductivity in the presence of hydrogen has gained a lot of interest in recent years, with hydrides under high pressure recently having reached critical temperatures around room-temperature. Alternatively, it has recently been demonstrated that hydrogen adatoms applied to superconducting two-dimensional materials can strongly enhance the electron-phonon coupling, and therefore the resulting critical temperature [J. Bekaert et al., Phys. Rev. Lett. 123, 077001 (2019)]. Since hydrogen is an ultralight element, nuclear degrees of freedom become important in the analysis of the superconducting state.

Therefore, the goal of this STSM was to explore nuclear quantum and anharmonic effects using a state-of-the-art computational framework developed in the Materials Physics Center in Donostia-San Sebastián (Spain) by Prof. Ion Errea and coworkers, called the Stochastic Self-Consistent Harmonic Approximation (SSCHA) approach. The SSCHA code generates a set of stochastic ensembles of supercells with displaced atomic positions, for which the total energies, forces and stresses are calculated through ab initio calculations, in this case using the Quantum Espresso code. These results are subsequently fed back to the SSCHA routine to perform a minimization of the free energy, thus optimizing all relevant degrees of freedom of the entire quantum system. During the STSM, this approach was applied to hydrogenated monolayer materials of prime current interest such as borophane and gallenane [M. Petrov et al., 2D Materials 8, 035056 (2021)], yielding new insights on the influence of quantum and anharmonic effects on the phonons and the electron-phonon coupling. The results of the work carried out during this STSM have demonstrated that hydrogenated monolayer materials harbor sizeable anharmonic effects in their phonon dispersions. Furthermore, the phonon softening, resulting from stretching of bonds between hydrogen and host atoms, can lead to further enhancement of the electron-phonon coupling, and therefore augmented superconducting critical temperatures in hydrogenated 2D materials.