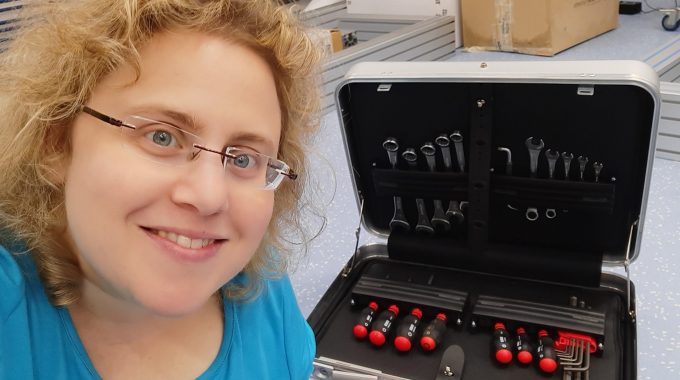 Beena Kalisky jumped into physics, as she says, by half inertia and half personal interest, until she created her own research team. Today, Beena is the principal investigator of the sensitive magnetic imaging lab at the Physics department and the Institute of Nanotechnology and Advanced Materials and a professor at Bar-Ilan University, in Israel. She is so excited about her science that there are nights when she wakes up to keep an eye on her SQUIDs from her computer.

Q. What do squids have to do with quantum physics?

A. SQUID is a cute acronym for Superconducting Quantum Interference Device. So, the SQUID is essentially a sensor, based on quantum phenomena, that translates magnetic signals, which is something very difficult to detect, into electrical signals that are easy to measure. A simple example of a sensor we all know is the mercury thermometer, where you want to measure temperature but at the end, what you are actually measuring is the length of the mercury in the tube. So the SQUID is like a really sensitive thermometer, but instead of temperature, it detects tiny magnetic fields.

The system we use in our lab is a scanning probe microscope, and the SQUID is our probe.  This sensor is very small, you cannot see it with a naked eye. The SQUID itself is a complicated device made of several layers, which are sandwiches of superconductors and insulators. These structures, called Josephson junctions, were explained by Halima G. Ahmad in the last interview.  In addition to Josephson junctions, more layers in this device are necessary to shield the signal and obtain very clean measurements.

Q. So, how do you use the SQUID in your daily work?

A. In my lab, we investigate the way electrons behave as a group. My team and I build our own microscope based on SQUIDs that can measure various electronic properties in quantum materials. We can look at magnetism, but also superconductivity, conductivity, and a wide range of physical properties in different materials. The cool thing about this probe is that we can do all these different measurements simultaneously. Thanks to this technology, our research covers a large spectrum of topics. We look at superconductors, quantum phase transitions, complex oxide interfaces, carbon nanotubes. We can even analyze bacteria from streams and sand from underground. But above all, we are interested in questions related to quantum electronic behavior. What we do is focus on specific questions in physics that we find interesting and we approach them with this unique set of eyes that we have in our lab.

Q. Can you give an example of something surprising you have observed with your SQUID system?

A. It is rare to find a project where we didn’t have surprises. We’ve been studying in the past year’s systems created at interfaces between two different materials. These material systems are carefully designed and grown to generate atomically flat interfaces, with on-demand properties. For example, in one of these atomically engineered interfaces, scientists found conductivity between two insulating oxide materials. When cooled to ultra-low temperatures, this two-dimensional interface is also superconducting. We went into this research to look at superconductivity and its intriguing relation to magnetism.  But what we found is that the conduction itself does not look as we expected. Instead of a homogeneous current flow, it was modulated on stripy features and looked like a network of lines.  So it is not just a smooth two-dimensional conductor, but also a little bit one-dimensional.

Then, my team published recently another interesting finding on nature communications. One of my students was trying to see what happens when a material goes from the conducting behavior, which is called a metal, to non-conducting, which is an insulator. When material approaches such a phase transition, it behaves in a well-known way, similar to water percolating through the ground, or coffee through a filter. The water (current flow) is trying to find the easiest and shortest (least resistant) path through the ground (the device). In our case, instead of such percolation, the path is “shorted” by the one-dimensional features mentioned above. Surprisingly, this changes the overall behavior of the system, which was supposed to be universal.

Q. Are other groups also using the scanning SQUID technique?

A. Yes, but this technique is not widespread. There are several types of SQUID microscopes. All of them are essentially the same simple SQUID, made of superconductors and Josephson junctions. But, the way you prepare them can lead to different capabilities. Different physical questions can be approached by different types of SQUIDs.

Q. Do you know the origin of the scanning SQUID technique?

A. There is a very peculiar historical fact. About 30 years ago, the company IBM wanted to develop a supercomputer made of Josephson junctions. They put amazing people and investment into this effort. But, although the computer didn’t happen, the development of the layered SQUIDs that we are using now came out of this project.

Q. So, did this amazing finding benefit people other than scientists?

A. Sensitive magnetic imaging can be useful for many things. It can sense faults in circuits by mapping where the current flows, it can detect cracks in airplane wings, look for archaeological findings or natural resources buried underground, and even detect the slight changes in the earth’s magnetic field. Another example is Magnetoencephalography (MEG), a helmet that has about 200 SQUIDs that can map neural activity in our brains, which are essentially small currents.

Q. Do you collaborate with other groups?

A. We collaborate a lot with other groups. It happens a lot that Nanocohybri members and also researchers from outside of the network have interesting findings, and we collaborate and image their samples. This COST action is a very good umbrella to know people. One of the aims is to form this huge group of researchers, to advance together with the topic of superconductivity.

Q. What are you working on next?

A. We are installing a new dilution refrigerator that will accommodate the SQUID microscope, so we can look at samples at much lower temperatures closer to the quantum limit. Now we can go down to 1.7 Kelvin (-271,45ºC). With this new refrigerator, we will be able to go down to temperatures much closer to zero (-273,15ºC). Once it is installed, we will dive into a long list of very interesting questions that we want to solve.