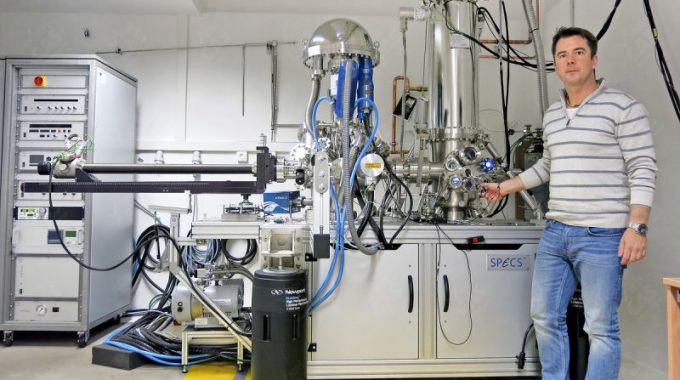 Tomas Samuely (Slovakia, 1981) was born the same year the scanning tunneling microscope (STM) was invented. A tool for imaging surfaces at the atomic level, which Tomas now uses almost daily in his laboratory. Today, Tomas is a senior researcher on superconducting nanostructures at the Pavol Jozef Šafárik University, in Slovakia.

Q. Why is the STM so fundamental to your research?

A. I’m always excited when I come to the lab and I use the STM. The scanning tunneling microscope is very useful to take a look at materials on their atomic scale. But also to see individual atoms and actually move them. This microscope has a tip that goes point by point on a sample’s surface, without touching it, to make a tunneling current. The power of this current depends on the movement of the tip and the local properties of the material. Then, all this information is recorded by a computer, showing us what happens down there. It’s somehow like a topography of your sample.

In our research, we specifically use the STM in an ultra-high vacuum, with very low temperatures, to study superconductors. There are some theories that explain why some materials become superconductors under these particular conditions. Which are actually very similar to the ones in outer space. But, there is still a long list of superconducting materials that we still don’t quite understand why they lost resistance and acquired other special properties under these circumstances.

Q. What is your team currently focused on?

A. My team and I started quite recently to test individual magnetic atoms on top of different superconducting materials. We know that superconductors and magnets repel each other. When you combine a very strong magnet near a superconductor, it usually destroys superconductivity. But we don’t really know why. With the STM, we are placing on a superconducting surface, individual magnetic atoms. Since they are just ‘small particles’ of a magnet, they do not have enough magnetic power to destroy the superconductivity instantly. It’s like playing with Lego. But instead of plastic bricks, we fit together atoms. We are trying with one, then two, then three magnetic atoms on the surface. And then, we observe how they influence the superconductors, and how their magnetic properties change. We haven’t got any conclusions yet, but there are several interesting reasons to follow those questions.

Q. What can be achieved by answering these questions?

A. We are potentially looking for materials that could be used for these futuristic devices or lead to more efficient technologies. I believe we are entering this so-called ‘second quantum’ revolution. Until recently, quantum mechanics were pure theory, but now we are starting to apply these fundamental laws in new devices. We know quantum physics can be useful for supercomputers, high-resolution sensors, communications, and many other applications that we cannot even imagine yet. Although right now it’s not possible to fully exploit the capabilities of superconductors on a large scale because they operate under these particular ‘outer space’ conditions.

The other impact, that is perhaps more relevant for us experimentalists, is that we are testing theories and pushing the frontiers of knowledge. The more we learn about our universe, the better tools we create. But also, new ideas can come into our minds, perceiving our world from another point of view.

A. Last year, we looked at a superconducting material and we observed really strange results. We got measurements that were correct separately, but then, when we tried to understand them as a whole, they didn’t fit with each other. So we felt like Hércules Poirot or Sherlock Holmes with all these clues, but with an unknown. This superconductor was a two-layered system formed by lanthanum selenide and niobium diselenide. So the sample was formed by two different materials combined. We knew there were these two different layers by theory. We even knew from chemists that one of these layers has atoms organized in squares and the other one has triangles. But as we looked through the STM, all we saw were triangles.

Then, one day, one of my Ph.D. students was clever and lucky enough to leave the sample in the STM at very low temperatures. We usually do this at room temperature. But when he cleaved it at a very low temperature, the material broke, and for an instant, they were there. We were able to observe the squares before they disappeared again. We realized then that we’ve never seen the squares before because they are unstable. When the material is cleaved, they move around and disappear. So that’s why we could only see the triangles that are very stable. But at low temperatures, the atoms move slowly, so we were able to observe them at least for a brief moment before they disappeared. This discovery made sense to all the measures we had taken up to that point. And not only for my team. It also helped a group of colleague researchers in France, that are also members of Nanocohybri, and made experiments on this same material.

Q. Have you also benefited from the collaboration with other researchers?

A. Just a week ago, we went to a Nanocohybri conference that I co-organized in Tatry, here in Slovakia. I was going to give a talk on a study we had done a year ago, on a superconducting diamond, that unfortunately, we didn’t get the chance to discuss at a conference until now, because of the pandemic. Before my talk, I went to see a presentation of a group of theoretical physicists from the Czech Republic. What was my surprise when I saw that they were using the images from my paper? It turned out that they got inspired by our last year’s publication and had time enough to make a theoretical model from our experiment. This was great. We have stayed in touch after the conference and they seem to have some results that could help us continue our studies.

Q. Why does this diamond attract so much attention?

A. As you may know, a diamond is made of carbon. But also, it can contain another element called boron. When you add boron atoms into a carbon diamond, the stone starts to become blue. Diamond is an insulator, so it doesn’t conduct electricity. On the other hand, with boron it does. The more boron you add, the bluer it gets. Behaving more and more like a conductor. You can keep adding boron until the diamond turns black. At that point is when, if you test it at very low temperatures, the diamond can also be superconducting.

We were testing this black diamond and we found out that, if it’s polycrystalline, which is like a condensed diamond, and it’s covered with hydrogen, it is both a superconductor and a ferromagnet. This is very interesting because, as I mentioned, superconductivity and magnetism hate each other normally. But there are exceptions in which they can interact. This is an endless playground, where surprises can arise every day.