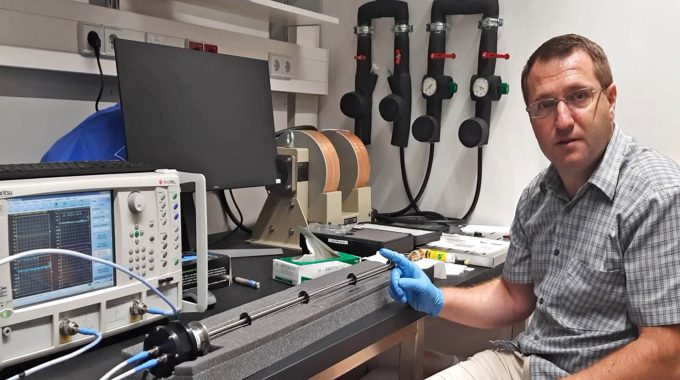 When Oleksandr Dobrovolskiy (Ukraine, 1984) was just a pupil, he got a bad mark on a test as he assumed electrical resistance can depend on voltage and current. Back then, in the school program, Ohm’s law, a basic law for understanding electrical circuits, stated these properties are independent. Since then, a lot has changed. Today, Oleksandr is head of the Superconductivity and Spintronics Laboratory at the Faculty of Physics in the University of Vienna, where he works, among others, on superconducting hybrid devices. Systems for quantum technologies, whose resistance depends on voltage or current.

Q. What exactly is the focus of your work?

A. My research focuses on the investigation of excitations and the dynamics of topological defects in magnetic and superconducting systems. We apply a broad palette of magneto-transport, microwave, and optical methods at cryogenic conditions. We also investigate the behavior of superconducting and magnetic materials in 3D and curvilinear geometries and extend our studies towards complex hybrid systems operated in the quantum regime.

Q. How can a superconductor be defective?

A. It is well known that there are two types of superconductors. Superconductors of type I are the only ones that have zero resistance when conducting electricity. While, superconductors of type II, are not really ‘super’ because of the motion of vortices. Vortices are whirls of electrical currents that carry a quantum of magnetic flux. When we apply a rather strong transport current to a type II superconductor, vortices move. Their motion implies energy losses and a non-zero voltage appears on the superconductor. This process has to do with a Lorentz-type force: When you have an object carrying magnetic flux, like a vortex, and you apply an electrical current, a force will move the object perpendicular to the applied field and the applied current. This motion requires energy which leads to a non-zero voltage and the appearance of dissipation.

Q. So your research focuses on type 2 superconductors?

A. Yes, let’s say I am working on giving them that ‘super power’. We deal with vortices in such superconductors and that actually stipulates the importance of this research because how to immobilize them, what are their maximal velocities, how to use these superconductors, either in the presence of externally applied architectures or just fields, generated by the electric current. That’s why my main role in the Nanocohybri Action is to collaborate with other groups and help understanding when type II superconductors can be used in future-generation devices.

Q. You also work on 3D-superconductors. What’s so interesting about them?

A. Most of the objects investigated in magnetism and superconductivity have traditionally been two-dimensional planar structures like very thin layered films. But in the very last years, there was tremendous development of 3D fabrication tools. For instance by strain engineering, by two-photon lithography, or by 3D nano printing assisted by focused electron and ion beams. The idea is just to have some precursor injected through a capillary into the chamber of a microscope. The focused electron (or ion) beam is then raster over the substrate surface on which the material of choice is deposited. It’s like a multi-color pen. But instead of colors, you have different materials which can be chosen with just a click. So you can fabricate hybrid structures wherever you like on a given point of your substrate material.

Now, the question is how the geometry will affect conducting and magnetic properties. This is very interesting because traditionally the effects of curvature and topology have been at the heart of research in relativistic physics and in astrophysics, with a huge universe landscape. At the low nanometer length scale, the curvature is omnipresent in biology and medicine, with a well-known example of twisted DNA chains. Curvilinear systems in magnetism and superconductivity are exactly in between these extreme length scales. So I’m talking about the mesoscale, roughly tens of micrometers down to tens of nanometers would be the length scale for such types of structures. This research is actually in the very beginning. We have a very first perspective article in Advanced Materials on superconductivity and magnetism in 3D and curvilinear geometries just published. So we just only begin to understand how the magnetic configuration and the dynamics of fundamental excitations – dynamics of vortices and superconductors and spin waves in magnetic materials – will be affected by the extension of the structures into the third dimension.

Q. What does excite you about your work?

A. In general, research is a very special occupation. It is associated with freedom, self-expression, and creativity. I cannot imagine myself out of it. You never stop learning something new, you are in a continuous process of self-education. I have already noticed the differences in the approaches in thinking, methodology, and technology since I started studying physics and this is a very interesting story to follow, but I am of course and in the middle of the story now.