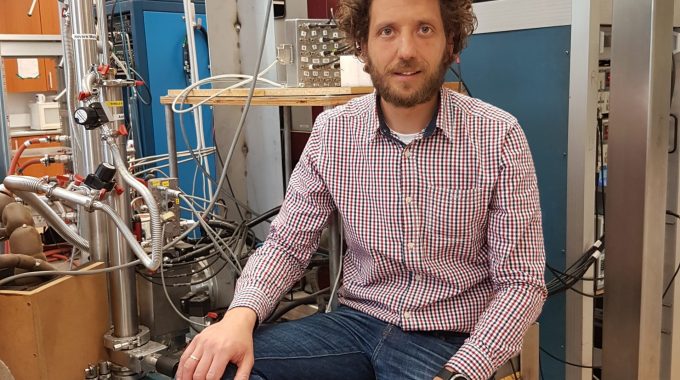 Szabolcs Csonka (Hungary, 1978) received a European Research Council (ERC) Starting Grant in 2011 to start his own research group after he designed the first Cooper-pair splitter device. Today, Szabolcs continues his research focused on hybrid nanocircuits as an associate professor at the Budapest University of Technology. He is now intrigued to see how far quantum physics research can progress in the upcoming years.

Q. What is your research about?

A. Our experimental activities are divided into two areas. The first one is focused on creating nanochips, and the other one, on studying them. One of the biggest challenges we are facing these days is Moore’s law. The chips developed for our daily devices are becoming faster and smaller. The problem appears when these chips reach the nanoscale because everything changes. They enter the world of quantum physics, which is governed by its own laws. It is a very complex world which we are still trying to understand because when these chips are too small, they start to give errors and do not work as expected.

So if we want to continue to develop faster and more efficient devices, we need to face quantum physics and adapt our technologies to its rules. So our job is to try to develop conceptionally new devices to use quantum physics to our advantage. To accomplish this we are trying different strategies.

Q. What kind of strategies?

A. For example, one of these strategies is spintronics. Spintronics is where the spin, the “rotation” of the electrons, stores the information in a transistor or a memory element and performs the logical operation by this magnetic information. This is the spintronic mechanism that governs the reader head of hard disks we use on a daily basis and that was discovered 33 years ago. These days, there are technologies close to the market, which could revolutionize this information storage technology. So, not the hard disks, but new spintronic devices which can be faster, smaller, and cheaper (like spin-orbit torque MRAM).

Another strategy is quantum computation, where the operation principle of the computer is based on the strange and non-intuitive laws of quantum mechanics. The envisioned applications are supercomputers, which are more powerful than today’s regular computers, but they are also more fragile. Thus, for proper operation, the system needs to be well isolated. Something that is very complicated to achieve in a large-scale system.

Q. Are you looking for solutions to protect these quantum computers?

A. There is one strategy called topological protection which is of great interest to us. We are working on such structures in superconducting nanocircuits. The goal is to store the information in a clever way, where local disturbances cannot destroy it. To illustrate with an example: if we don’t want to forget something until we get home, we can tie a bunch of our earphones. Either way, it will shake in our pockets the knot won’t disappear from it. This is topological protection.

Q. Are there any other areas of quantum computing that you are exploring?

A. We are working on quantum bits based on quantum dots. These are like artificial atoms. From the electronic point of view, the atom has a nucleus, which is a central core, surrounded by electrons. So our quantum dots are like baskets where you can put electrons. The shape of the basket is defined by the nanocircuits our research group designs. For example, we can trap a single electron in this artificial atom, such as a hydrogen atom with only one electron, or we can change the shape of this basket, make it bigger so two electrons can sit inside. Then our artificial atom is no longer hydrogen-like but more like a helium atom with two electrons. Quantum computing is a potential application for these quantum dots, but not the only one.

Q. Can you give us an example of another application?

A. There is also a very interesting device called Cooper-pair Splitter, which is also connected to superconductivity. Superconductors are materials where electrons form pairs, which are called the Cooper pairs. As soon as the electrons are forming such pairs, this makes some of the beautiful properties of the superconductor. What is interesting, is that you can separate these entangled electrons into different quantum dots and they still remain connected. For instance, if you manipulate the spin of the electron in one quantum dot, the other related pair located in a different quantum dot would instantaneously react too.

There is a promising type of quantum computer architecture called spin qubits, which uses the spin of individual electrons captured in quantum dots. If we want to quantum mechanically entangle spatially separated spin qubits Cooper-pair Splitters provide a solution. With Cooper-pair Splitter we could realize a process similar to quantum teleportation, where the separated electron pairs remain connected even if you bring one of them to the end of the universe.

Q. Are you studying these Cooper-pair Splitters?

A. Yes, we are continuously developing Splitter devices and study various aspects, like the recently special localized state. At first, in these premature experiments, there were some features we couldn’t understand. But I remember that in a Nanocohybri conference that took place in France in Les Archs, several doubts were cleared up for us. I met some researchers that were making very high-resolution images on the surface of a superconductor with the Scanning Tunneling Microscope (STM) technique that you discussed with Tomas Samuely. We realized that we were using different languages and techniques, but what they were observing in these surface experiments was much related to our localized states in Splitters. This meeting gave us a really great insight into our problem from a completely different point of view, which helped us end up with a publication in nature communications and continue with our experiments on special quantum circuits.

Q. What other advantages do you think the Nanocohybri action offers you?

A. Of course, these networks have a multitude of advantages for students, researchers, etc. But I think the great advantage is that this Nanocohybri action brings together scientists with a common goal: fabricate quantum devices; but from different communities, different countries, and different backgrounds. There are surface scientists, superconductivity researchers, STM experts, etc.