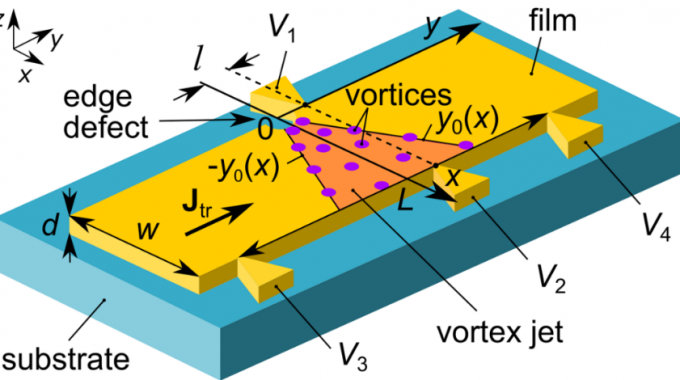 The purpose of the STSM was to investigate experimentally patterns of Abrikosov vortices (vortex jets) and the associated voltage response in superconductor thin films with edge defects. In the course of the STSM, the applicant had access to MoSi thin strips with artificial edge defects in the form of notches. The workplan encompassed electrical resistance measurements of the transverse voltages on these films. The presence of a transverse voltage is an indicator for the vortex velocity component along the superconducting strip occurring due to the vortex-vortex repulsion in the vortex jet. Specifically, three regimes have been investigated: (i) Weak currents: From measurements of the I-V curves, the threshold current above which the edge barrier is suppressed has been quantified and compared with the critical current of the plain strips. The smallness of the threshold current in comparison with the critical current of the plain strip has corroborated that the vortices indeed enter via the edge defect. (ii) Intermediate currents: When the vortices start to penetrate, their trajectories in the vortex jet diverge. With increase of the transport current, the vortices move faster, and the transverse voltage increases. By comparing the I-V data for MoSi strips with defects spaced by different distances away from the transverse voltage leads, the maximal transverse voltage has allowed us to deduce the opening angle of the vortex jet. (iii) Strong currents: The current-vortex interaction dominates the vortex-vortex interaction. The vortices are accelerated to yet higher vortex velocities and the vortex jet angle will be decreasing. Accordingly, the vortex jet is being gradually transformed into a vortex chain, in which all vortices move along the same trajectories. A detailed comparison of the experimental results with an analytical theory and TDGL simulations is reported in arXiv:2204.06467.