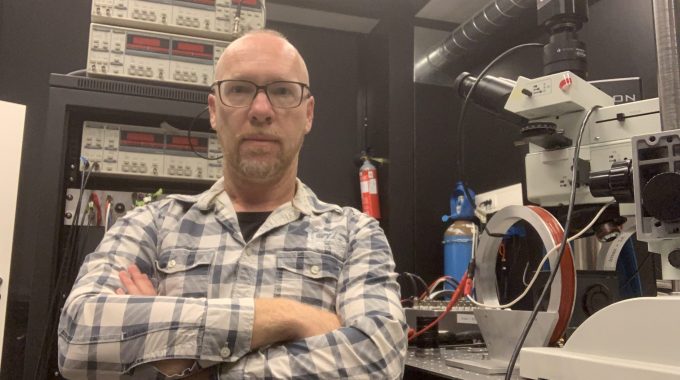 Alejandro V. Silhanek (Argentina, 1972) went through different techniques in nanotechnology until his curiosity led him to the latest developments in superconducting hybrid devices. Since 2011, he is a research professor at the Physics Department in the University of Liège in Belgium. These days, he enjoys teaching physics to promise young minds as much as conducting experiments with a pioneering technique called electromigration.

Q. Do you know where this technique came from?

A. In the beginning, electromigration was not a technique, it represented an enormous and costly problem. Back in the 60s, when the first integrated circuits were introduced in the market, they tended to fail after few weeks. At first, manufacturers didn’t know what was the reason for the failure since nothing was evidently wrong under the optical microscope. But then, after careful inspection of the circuitry using electron microscopes, an exciting new tool of the time, it was possible to identify tiny cracks and short-circuits produced by material overgrowth. Researchers found out that the comparably high currents flowing through the tiny circuits were sufficient to drag the atoms and consequently deteriorate the structure at the nanoscale. Electromigration was a serious issue then, and it continues to be one at present times as miniaturization and wiring stacking continue.

We have since learned first to mitigate and then master this unwanted effect in such a way that we can make something useful out of it. The continuous electric stress on a specifically targeted section can be tamed so as to reduce its dimension or tailor its properties at will. In our laboratory, we are bringing together concepts, such as electromigration and superconductivity, which at first sight seem antagonistic, to find innovative research directions and applications. I am quite excited to work with this new technique and look forward to the blooming opportunities that lie ahead of this synergy between superconductivity and electromigration.

Q. You have been working with superconducting systems for several years now. What is the most curious thing you have seen?

A. A lot of physicists who study superconducting hybrid systems work at the nanoscale with samples substantially smaller than a cross-section of a human hair. This is a scale that the human eye cannot reach, so most of the time we observe the results through an optical microscope or more indirectly, through detectors replacing our eyes and which request interpretation. Normally, there is not much to see under the optical microscope since changes of the material properties are rather imperceptible and remain unnoticed.

Recently, when we were looking at a high critical temperature (Tc~-180°C) superconductor known as YBCO through a standard optical microscope. This material is ceramic, not a very good conductor, and it normally looks dark. By continuously visualizing a microscopic strip of YBCO while simultaneously applying high current density through it, we noticed that part of the dark sample starts becoming brighter and that this brighter zone propagates further as the current increases. We knew already that depleting the oxygen content in YBCO would lead to higher reflectivity, so we were, essentially, seeing the diffusion of oxygen vacancies in real-time. This is extraordinary in the sense that it is rare in our field to be able to witness such direct evidence of a physical process at the nanoscale.

Q. How exactly can you alter the oxygen content in an oxide superconductor?

A. There are different techniques to achieve this goal. These oxide superconductors I was talking about, for example, have a complex structure and their growth process needs to be carefully controlled. It is during this process that the oxygen content can be tuned by properly adjusting the temperature, pressure, atmosphere, substrate, etc. For decades, scientists who were interested in comparing samples with different oxygen contents needed to painstakingly grow separate films thereby suffering from unavoidable fluctuations in the growing conditions and rendering their comparison not fully accurate.

Electromigration allows us to achieve the same goal, i.e. different amounts of oxygen in the material, while at the same time overcomes several problems. Firstly, it is very easy to implement and does not require expensive equipment. Secondly, it permits continuous variation of the oxygen content in the very same sample thus rendering the comparison meaningful and accurate. The way it works is through high electric current. This is usually pictured as an electron wind that pushes the ions in the atomic lattice and produces electronic erosion. Depending on the amount of injected current and the way the atoms arrange themselves in the crystal lattice, you can remove one or more species of atoms. In our case, we set the current in such a way to only move oxygen atoms in a precise way. More interestingly, by simply reversing the current polarity, we can also bring the atoms back and reverse the effect of electromigration, to some extent!

Q. How can electromigration be useful for scientists?

A. By moving the atoms and altering the oxygen distribution one can change several properties of the YBCO superconductor. This includes for instance rendering the system antiferromagnetic and insulating or superconducting and non-magnetic and even the possibility to switch between these two states which represents a way to save information in binary form.

We have shown other applications of electromigration in superconductors, in particular, the possibility to create and control the strength of weak links connecting two superconducting banks and creating nano heaters. Away from superconductivity, further applications have been reported for cleaning graphene, creating optical nanoantennas, fabricating nanogaps for interfacing single molecules, etc.

Q. What applications can these cases have?

A. The presence of weak links in a superconducting strip gives rise to a fascinating phenomenon known as the Josephson effect which is at the core of superconducting quantum interferometry device (SQUID) technology, one of the key elements in modern quantum processors. In addition, SQUIDs are the most sensitive magnetic field sensors available today and are frequently used as a research tool to build up cartographies of the magnetic field distributions, as shown by Beena Kalisky. Electromigration can be regarded as a knob for changing the properties of superconducting weak links.

The options that electromigration offers are basically endless. I am convinced it could greatly facilitate some aspects of nanofabrication which otherwise require involved procedures. It is not only simpler, but it is also more accessible than most of the nanofabrication techniques that are used in laboratories. I strive to convince my colleagues at Nanocohybri Action to start implementing electromigration in their daily research projects.

Q. Have you convinced anyone yet?

A. I hope so. Moving oxygen with an electric field has been investigated and reported by some of my colleagues, for instance, Anna Palau from the Institute of Materials Science of Barcelona. I discussed with Anna the possibility of using current rather than electric field and since then, we started a partnership for a collaborative electromigration project.

I think these initiatives, like the Nanohybrid COST Action, bring wonderful opportunities for collaboration and help to share knowledge and infrastructure across European research groups. I am convinced COST offers a perfect way to stay on top of the latest developments in our field in a more stimulating fashion than simply reading papers from colleagues.

Q. Has the Nanocohybri Action given you any other benefits?

A. Certainly. My students are benefiting a lot from the network. They have participated in numerous online and hybrid events organized by the action. Moreover, COST has financed short-term scientific missions of some of my students to the laboratory of Dieter Kölle in Tübingen, Germany (http://www.physik.uni-tuebingen.de/fkp) to perform SQUID response measurements and to the group of Wilson Ortiz in Sao Carlos, Brazil (DF-UFSCar) to measure the magnetic response of superconductors. At the moment, we are planning a visit to the group of Clemens Winkelmann in Grenoble (Institut Néel / CNRS & Univ. Grenoble Alpes). I try to involve my students in the COST network as much as I can because they are the real engine behind the research achievements and they bring a unique dynamic and refreshing attitude.